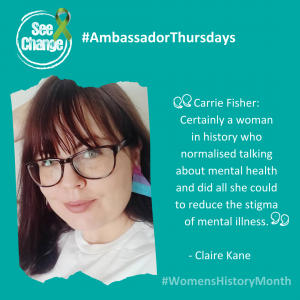 When prompted to write something about a woman in history who advocated for mental health, the first name that came to mind was Carrie Fisher. Having played such an iconic role, Princess Leia in Star Wars, she doesn’t get nearly as much celebration as a mental health advocate as she deserves. So let’s changed that here.

The actress and writer was diagnosed with bipolar disorder in her 20s. Throughout her life, she highlighted what it was like to live with the illness, alongside addiction, through interviews and through her writing in a way that only she can; with acerbic wit and blunt-force honesty. Every time she shared her story, regardless of the medium, her message was clear: there is no shame in ill mental health. So, in women’s history month, in order to honour the work Carrie did to reduce stigma around mental illness and mental health management, let’s look at some of the ways she did this;

Carrie was a true advocate for seeking professional help and support for mental illness. In her books, she details the various treatments and supports she received, from medication, to psychotherapy, to her beloved therapy dog Gary. She also emphasised the importance of seeking help every chance she could in forums, at rallies and in interviews. It was one of her most consistent messages: you don’t have to and you shouldn’t face a mental illness alone. In a candid interview with People Magazine in 2013 she said; “The only lesson for me, or for anybody, is that you have to go get help. It’s not a neat illness. It doesn’t go away.”

In Fisher’s book Wishful Drinking she uses her trademark biting wit to discuss what it was like for her to experience addiction while living with bipolar disorder. While the book is sprinkled with her abstract, unicorn humour, there are moments of earnestness, such as when she explains the might and will it takes to live with a mental illness.

“At times, being bipolar can be an all-consuming challenge, requiring a lot of stamina and even more courage,” She wrote, “so if you’re living with this illness and functioning at all, it’s something to be proud of, not ashamed of. They should issue medals along with a steady stream of medication.”

As you might gather from the above quote, Carrie Fisher was an advocate for medication. Even now, there can still be an unease about the idea of using medication to treat a mental illness; there is a stigma attached to it despite it being a necessary treatment for many illnesses and many people. Fisher regularly spoke and wrote about how medication helped her to live a normal life, often punctuating that statement with “whatever that is.” She was frank about the fact that medication enabled her to function as a human being. Speaking in 2001 at a rally in Indianapolis for increased state funding for mental illness treatment she said; “Without medication, I would not be able to function in this world. Medication has made me a good mother, a good friend, a good daughter.”

Carrie Fisher often specified that the language we use around mental health needs to change, for example, rather than saying someone is bipolar, we need to say they have bipolar. She spoke frequently about how we as a society should make an effort to not see people as their diagnosis but as people who simply have been diagnosed with something. She once said; “…generally someone who has bipolar doesn’t just have bipolar. They have bipolar and they have a life and a job and a kid and a hat and parents. So it’s not your overriding identity, it’s just something that you have.”

Something Carrie Fisher said most often was that we should never, ever be ashamed of our experiences with difficult mental health. In each of her books she writes about how she says “I have bipolar” with conviction instead of a squirm or any shade of embarrassment. That is one of the biggest and most important things we can take from Carrie Fisher’s advocacy; that we should never be ashamed of our experiences with mental health difficulties and that we shouldn’t be afraid to share our stories. She called living with her own mental illness “an emotional survival” and encouraged people who also survived and lived with mental illness to share their stories as much as possible. She called it “an opportunity to be heroic” and a chance to set a good example to others who might be experiencing the same things.

Often referred to as an O.G. Mental Health Hero, Carrie Fisher should be remembered as being one of the most honest and outspoken mental health advocates of the 20th and 21st centuries as much as she is for being Princess Leia. Her unapologetic ownership of her diagnosis has directly and indirectly led to countless others letting go of any shame they might have held and reframed how they viewed their own experiences. Certainly a woman in history who normalised talking about mental health and did all she could to reduce the stigma of mental illness. Far from just being a space princess in a gold bikini, she was a hero on screen, for sure, but a hero in real life too. Her advocacy was a force, a force that we can all carry on with us.