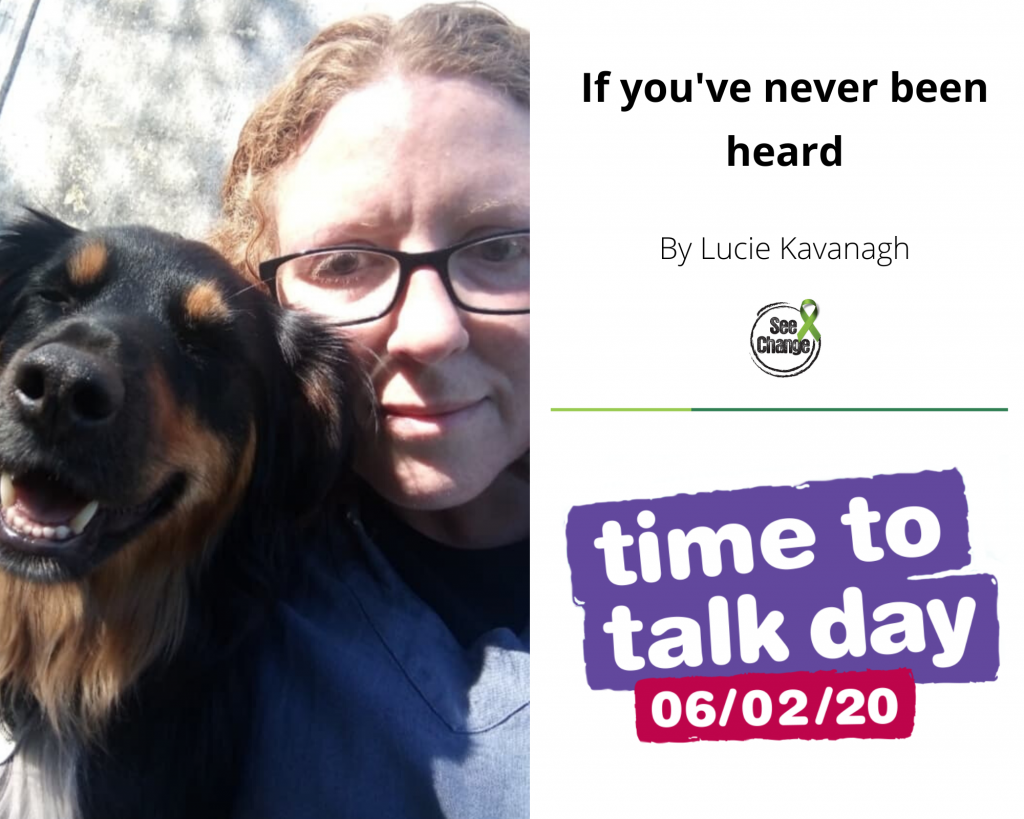 “I can remember the frustration of not being able to talk. I knew what I wanted to say, but I could not get the words out, so I would just scream.”

I worked for almost 20 years as a social care worker.  Despite what people tactfully call the “breakdown”, it was a job I loved. The people I cared for are firmly etched on the front of most of my thoughts.

I worked mainly with adults who have no verbal communication and many with a diagnosis of autism.  Most of these people are in their 50s now.  They were babies and young children at a time that autism was not widely recognised or understood.  I’ve read some of the medical files from their childhoods and winced at the labels and language used to describe their conditions.  In their communities, there were no services for people with disabilities.  Their parents’ choices were bleak-do the best they could at home or send them across the country to residential schools or hospitals.  In these small communities they were treated kindly and with love but often there was a lack of understanding at how their brains functioned differently, that despite not having verbal speech, they had other communication skills, that their needs for order, structure and routine were not just quirks or awkwardness, they were essentials.

In short, I supported people who needed help to get make themselves understood, to put words to their experiences, and who, without a language that others could hear, sometimes had to express themselves through behaviour.  This behaviour could be violent, shocking, dangerous, loud or plain annoying-it had to be.  It was their last resort to be heard.  It was needed for emergencies-extreme need, physical pain, hurt, fear or rage.

I designed communication systems.  Seeing how quickly an individual could sense that this system, whether made up of objects, pictures or photos, was personal to them and that they could use it express a need and have others respond to that need, was one of my proudest moments.  I didn’t see it as giving words to someone.  The words were already in their minds.  They just needed a medium to get them across to others.

One of the people I supported-let’s call her Anne-used to get very distressed when she wanted to go shopping and it wasn’t possible or wasn’t possible right at that moment.  Anne’s communication system involved a chart with photos of everything and anything in her life.  Putting them in order could form her timetable for the day. The photos allowed us to tell her when it wasn’t possible to go out-we would put up photos of an alternative activity, Anne would replace with her outing photograph and negotiations would commence.  Without ever speaking a word in her life, Anne was having arguments. She was consenting or disagreeing. She was gaining control over her life.  Her frustration was still there, especially when that outing wasn’t possible, but it was less.  Even when the answer was not the one she wanted, she was still being heard.

Anne and other people I worked with have abilities that I do not.  They can access their emotions.  They can feel and express them.  Their feelings, expressions and body language are always beautifully in sync. The rawness of their anger and distress can be painfully tangible but it is real.  Their love is honest.  Their pleasure is delightful. Everything is on the surface.  Their frustration always clawed through me, almost visible. Just as Anne treasured her link to the world of two-way communication, I drank in the depth of what they felt.  Our relationship felt symbiotic.

I miss my work.  I think about it and dream about it almost constantly.

I had a session recently with a therapist I’ve seen three times while my own therapist is away.  We don’t go into anything “deep” for this reason. He asked me about the hard days I’ve had lately and what they look and feel like.  I told him about how it might start with comparing how I am now with a few years ago and having thoughts of “how did I get to this” and then to guilt about not working, anger at myself because it should be so easy to just pick up the pieces, get a job and get back to some semblance of normality. But something tells me it’s impossible-something caught between fear and sadness and desperation. They are real, he assured me.  That fear is real. Anxiety is real.

“Have you ever had the normality you describe?” he asked when I tried to talk about how a healthy mind might view socialising, healthy work/life balance, dreams, ideals, peace of mind.

I was forced to admit that no, even at the “healthiest” times of my life there was always that shadowy something that had to be escaped by working hard or becoming immersed in some other obsession.  It had never been easy to do the things that, it seemed, was natural to everyone else-making friends, forming bonds, falling in love, getting out into the world.

“It’s not that I think there’s any danger outside my home,” I said, returning to the present, “but I feel like it’s only safe at home on my own.”

We teased that one apart over the course of a painful hour.  We discussed how work had always been something to hide from the rest of the world behind. The therapist said something strangely comforting-that my work had been an expression of myself. I had chosen a career where I needed to connect deeply with people but safely and with boundaries.  He said that I should remember that even if I had hidden behind my job, I shouldn’t use that as a stick to beat myself with.  It served as a way to form relationships in a safe, structured way-everything was predictable, I never had to go “too deep” or personal before being ready.  I was experiencing the world in a way that felt ok.  And without it, the world stopped feeling safe.

Then we talked about childhood and how, if you never have the freedom to rebel, either as a young child or a teenager, the child learns to suppress their feelings.  If they have to continually be who they are needed to be, the person they are is put away along with those feelings.

That person is still put away.  Doesn’t feel safe to speak up. Doesn’t get angry.  Keeps wanting to put things right-over and over and over.

I told him about the line I read in a diary a year ago from a thirteen year old me:

I need to find Anne’s photos and chart for myself.  I need to learn to bargain, to choose, to argue, to shout.  But there’s a mountain to climb. There’s miles and miles of rocky paths-uphill, heavy and slow.

The fear is real. Thanks to my work, I learned to trust the truth of emotions a long time ago. Even though they weren’t mine.

“I’ve listened enough. It’s time for me to speak, however it may sound. Through an electronic device, my hands, or my mouth. Now it’s your time to listen. Are you ready?”

“Each day seems like a boring Bank Holiday Monday.”