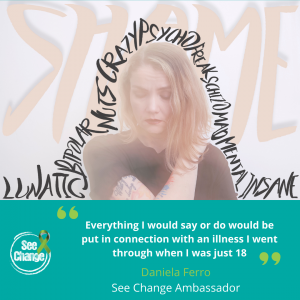 When I was 18, I went through an episode of Psychosis. I was in a mental health ward for two weeks and after a relapse recovered at my family’s house for a few more weeks. After that, I was in the great care of my Psychiatrist who explained to me what was going on in my brain, why it had happened and how he was here to help me become healthy again. He found the right medication for me to prevent it from happening again and live a “normal” and happy life. I am on medication ever since and never experienced a psychosis again.

We were about (what I didn’t know at this stage) halfway through our relationship when I told him that. What I also didn’t know was that these few sentences would be used as a weapon against me once our relationship ended. When he ensured to shame me, repeatedly and whenever he had the chance. He threatened me, he humiliated me, he contacted close and not so close people of my circles and kept telling everyone how I was a “mad yoke”, a “psycho”, a “crazy bitch”, a “lunatic”.

Everything I would say or do would be put in connection with an illness I went through when I was just 18. Over 10 years later, he made my life a living hell. He stalked me, he threatened to drive over me, he broke into my house, he kidnapped my dog and he shamed me for something that was not my fault. For an illness I once had, got the right treatment for and support, and did everything in my power to stay healthy.

I started to question myself: Was I really imagining this like he was telling even my work colleagues? Was I getting ill again? Was something wrong with me? I was so embarrassed! I felt so much shame and guilt and everything was so much to deal with. I remember running to the bathroom at work, hiding there as I was crying the tears that would just overcome me without warning every now and then.

That one cold night when it was the beginning of the end and the start of his shaming, I didn’t just lose my partner. I lost a part of my innocence because a trusted person suddenly turned around and became somebody I didn’t recognize, somebody I was afraid of, somebody even my friend would be afraid of.

We were constantly wondering what he would do next. I moved and made sure that my new address would be kept a secret. I went to court and lost, as the judge decided that his lies made more sense than my truth.

Because of my job, I left Ireland for two years just a few months after all this. The physical distance helped to work through what had happened and to find my trust in people again and strip myself of the shame he forced me to wear like an itchy and uncomfortable shirt which is a number too small on a bad hair day.

The shaming, the fear, the unknown…it was a test of my mental health for sure, but it held up and is holding up. Yes, there were a few bumps on the way, but with medical help and loving support, my (a few years back diagnosed) general anxiety disorder is something I live with like any other person with a chronic illness.

We learn what is good for us and what is bad. We find treatment. We learn to accept it and learn to work with it.