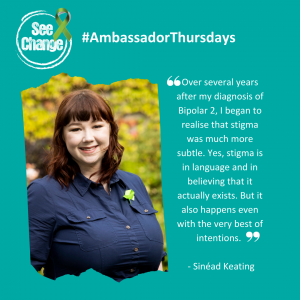 I used to think that stigma was clear, that it was saying that mental illness doesn’t exist, people should just make an effort, think positively, calling others with mental illness crazy etc. Over several years after my diagnosis of Bipolar 2, I began to realise that stigma was much more subtle. Yes stigma is in language and in believing that it actually exists. But it also happens even with the very best of intentions.

I began to realise that there were some who didn’t always think I was capable of making choices for myself; choices such as how I wanted to live openly with my illness, medication, how much work I wanted to take on etc. It made me think about when I’ve judged others in the same way. There have been times that I thought I was being considerate by not putting pressure on people who had a mental health condition to come somewhere or be involved in something, so I wouldn’t ask. I assumed it was a relief to people not be burdened with making choices because they probably weren’t able, they weren’t well enough, they needed to be looked after. I thought I was being kind when I was infantilising.

Much of this had to do with how I felt about myself. Other people needed help, but I shouldn’t. Other people were more disadvantaged than me, had less opportunities than me, were sicker than me. Without realising I was doing it, I was othering them and putting myself on a pedestal. There’s no greater reality check than falling off. It was then I recognised that everyone else with a mental illness is my peer. Even outside the issue of mental health, we are all peers. Maybe we are separated by our class, our age, our gender, whatever it is. But we are all peers with different experiences. No one is better or worse.

It’s not our fault that we grow up in a world that others mental ill health, that treats people with mental illnesses as if they have less agency, need decisions made for them, or shouldn’t be burdened with being asked to events when they probably don’t want to come, so we don’t ask. It’s simply that we take the time to reflect on our unconscious perceptions and ask ourselves if they serve a purpose anymore. There is no shame in recognising our past judgements. When we know better, we can do better.