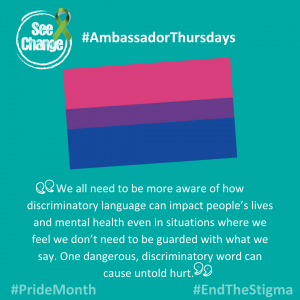 Discrimination can be described as the act of making unjustified and often harmful distinctions between human beings based on the groups, class or categories to which they belong. It doesn’t have to be overt or done on a large scale. It can be as simple as saying one dangerous word.

The first time I experienced discrimination relating to sexuality I was nine years old. This was in 1990s Ireland and I guess you could say that things were not as progressive as they appear to be now. With that said, a close relative of mine was openly gay and it was never something I had to be told, it was just something that was. There was never any smirking or any snide remarks, it was never a subject to be discussed. So you can imagine the discomfort of when another close family member said upon seeing two men kissing on the TV that it was “unnatural”. I didn’t understand. I still remember saying, “But it’s natural for them.” The remark was doubled down on, “it’s unnatural, men and women are supposed to be together.” There were no other adults around, no one to tell this person they were wrong and I was right. Now I didn’t know what the words discrimination and unjustified meant at the time but I knew that this family member was making an untrue distinction: straight people are right and gay people are wrong.

Despite knowing this was not a correct view of things, despite challenging this much older relative on it, the words terrified me. You see, no more than a week earlier I was watching MTV, as we all incessantly did in the ‘90s, and I experienced something for the first time. I was only nine so I wouldn’t call it a sexual awakening, but more of a realisation. While I had the typical boyband crushes and convinced myself I would marry both Stephen Gately and Nick from Backstreet Boys, I never thought to look at a woman with the same moon-eyed, childlike glee. But that fateful day, the video for George Michael’s Outside came on. You know, the one he released when he was outed by the press following an arrest in a public toilet? The one where the porcelain urinals turn into disco ball urinals and George and his dancers rock up in their raunch cop costumes brandishing truncheons? Yeah, that one. At first I thought, wow, George Michael is way more interesting to look at that Stephen Gately or Nick from Backstreet Boys. And then I thought so were the two curly haired women dancing behind him. I remember being excited by this, the prospect of being able to, allowed to, like the look of George Michael and the women dancing behind him. But I was also confused because I didn’t know this was possible. I knew women could fancy women as much as men could fancy men, I was a child of the ‘90s and Friends was in its prime by this point, but it still felt somehow like something I should keep secret until I figured it out.

My time to figure it out was cut short, though, by that relative and that one dangerous word, “unnatural.” I was scared that the family member who said it would think I was disgusting, because what I saw on his face when he uttered that word was pure disgust. When you’re a child your whole world is your family, you haven’t yet reached that age where your friends are the fulcrum on which your life pivots. And I had already developed a deep sense of need to not upset anybody, it was a recipe for eventual self destruction. And so two decades of repression began.

I, like most people in the LGBTQIA+ community, have experienced and witness discrimination since. From in-community judgement of not being queer enough because I am bisexual to thoughtless remarks from teen hood friends about looking for attention or being greedy. But nothing had as enormous an impact as that early experience. When I was a teenager I was so careful about who I let know about my bisexuality. A small group of friends, the majority of whom were gay and bi, were the only ones who knew but core friends didn’t. I was afraid, in a single-sex school, that I would be branded as “unnatural” especially having heard disparaging whispers about probable lesbians in the school as though that was the worst thing anyone could be.

By the time I got to my 20s I was in complete denial and labelled my teens a phase. I mercilessly cut friends out of my life who knew the truth and I became lonely and confused about who I would present myself to the world as. It was torture. My life was clouded in shame and pretence which led to deep self loathing, severe depression and self harm that continued for many years. There is no denying at this point in my life that repressing my true, full self and hiding my sexuality from literally everyone in my life contributed quite enormously to my mental ill health in my 20s. While there is no knowing that it wouldn’t have turned out the same if that word hadn’t been uttered in my presence as a child on the cusp of prepubescence, I can never shake the feeling that if I didn’t sense that air of disgust, if I wasn’t told it was “unnatural” things would have been easier. I probably would have innocently announced my crush on George Michael’s dancers without thinking anything of it and that would have been that. Instead, like the sponges children are, I absorbed the shame, and carried it with me for far, far too long.

I often wonder if that family member remembers what they said. And if they knew how those that one word impacted my life, how they would react. What happens to us, what we witness, what we feel, what we hear as children can colour so much of our teen and adult lives. My stomach churns when I hear people saying discriminatory things of any nature around children now. I want to grab the adult and say, “you don’t realise the damage you might be doing!” Please, if you are reading this: never smirk at things that don’t fit into the heteronormative paradigm, never tell a little boy that, no, he can’t wear his sister’s princess costume or force your daughter to call your friend’s son her boyfriend. We all need to be more aware of how discriminatory language can impact people’s lives and mental health even in situations where we feel we don’t need to be guarded with what we say. One dangerous, discriminatory word can cause untold hurt.

In case anyone is wondering, no, I haven’t developed a police uniform fetish in adulthood. I have however, got a very special place in my heart for George Michael, for his music and that artful video in particular, for helping me realise who I really was for the first time.