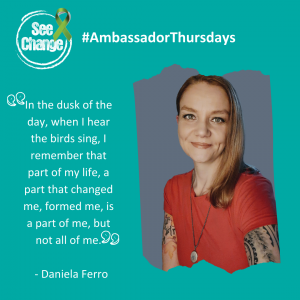 “Schizophrenia involves a psychosis, a type of mental illness in which a person can’t tell what’s real from what’s imagined. At times, people with psychotic disorders lose touch with reality. The world may seem like a jumble of confusing thoughts, images, and sounds. Their behaviour may be very strange and even shocking.” *

For me, what remained were the memories that flood back when the birds sing their songs in the dusk of the day.

It was spring 1999: I was 18, I was in love, I was getting ready for the final exams of my school career. A bright young woman, excited and optimistic. You could say I was pretty normal, just a teenager hungry for life.

And then my life changed. It didn’t just change, it crumbled and neither my family and even less myself understood what was going on with me.

It started with sleepless nights, a restless mind, questioning every word I had said over the course of the day, questioning every interaction I had with other people, going as far as questioning what I watched on TV and listened to on the radio. I felt watched, followed, threatened, spied on, listened to, filmed, recorded.  People weren’t just listening to what I said out loud, they could hear my thoughts, could control my thoughts, even went as far as sending voices into my head. These voices weren’t kind. They were mean, they spoke very harshly about me, they were a threat….and so my living nightmare began.

The most prominent feeling I remember was fear. Fear of everyone around me, even fear of the closest people, my family and friends. They were all fake. Everything was fake. Nothing was real. My life was fake. I had been living in a big fat lie for almost 19 years. It was a movie I didn’t know to be part of until now, my moment of awakening.  Cameras followed me where ever I went, microphones were set up everywhere, my mum wasn’t my real mum, she was an actress wearing a mask and a wig.
Suddenly it ALL made sense. It was like the universe finally revealed itself to me, all the pieces of the puzzle slotted into place. I had been woken up, a bit like Neo in Matrix, but I didn’t choose to wake up. In fact, I was terrified of my new found special status.

I couldn’t make decisions. Neither big decisions nor small ones like did I want tea or coffee with my breakfast. I stopped trusting everyone around me, they all wanted only bad things to happen to me. I was a disaster, I was a disappointment, the whole world saw me failing and was laughing at me. There was nowhere to hide, they followed me…all the way into my thoughts.

The GP came to my home. It took hours and hours of her talking to me to finally agree to take some medication to quieten my mind, to get me to sleep.

What now followed, my mind kindly has partially covered with the bliss of forgetfulness.

I remember small pieces of the next few weeks. The judge, that sent me to a mental health hospital, well actually, she locked me up there. I was under 24hours surveillance and was taking countless pills and potions. I wasn’t allowed to leave the ward.
One memory is that one day I refused to take my pills one morning. The next memory is being held down and getting the medication injected.
I remember talking to and hiding from other patients. All people had similar or worse mental health problems than I had. We were all so different, but all the same. We were a threat to ourselves and had to be saved from ourselves.
I remember seeing a witch in the window, things moving, that couldn’t move, hearing things that weren’t there, forgetting my family had visited me during the day and calling them in the evening asking for when they would come.

I remember being awake for hours during the night. I remember the birds signing in front of my hospital room in the dusk of the day.
I was on the edge, in the constant haze of the medication I was given, fighting with side effects like cramps, switching medication because of that, feeling locked up.
Not just in the ward of the hospital, but also in my mind. The thoughts at some point started slowing down, becoming less threatening. The voices started fading, then disappeared. I started to feel other things than just pure and primal fear. I came back to life. Very slowly. Taking it moment by moment, day by day.
The road ahead wasn’t an easy one, it wasn’t a straight line, but it was lined with doctors, family and friends which were by my side and helped me recover.  In the dusk of the day, when I hear the birds sing, I remember that part of my life, a part that changed me, formed me, is a part of me, but not all of me. It did not and does not define me, but it’s part of who I am.