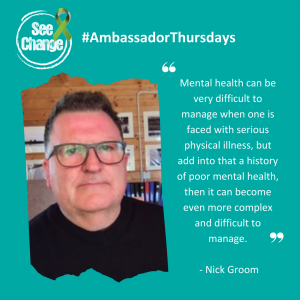 It was just before Christmas of last year that I noticed it was becoming more difficult to swallow and there was the very real feeling of an obstruction in my throat. Furthermore, close friends and family had begun noticing a definite change to my voice; it sounded as if something had a tight grip around my throat. It was several weeks later following a very unpleasant scope, a PET Scan and a biopsy that I got the call from the hospital to confirm that there was a malignant tumour that indeed had a very tight grip around my throat and was dangerously close to my vocal chords, hence the change in my voice.

Cancer is very prevalent in the male side of my family. My father and his brother both died of cancer. My maternal grandfather and his two brothers all died of cancer. It had become the Sword of Damocles hanging over my head. So, when I was told I had throat cancer there was an odd sense of relief. This feeling of relief was compounded by the additional news that it was totally curable.

It was probably at that time that mentally I went into survival mode, in other words my emotions went into safe mode, just as a computer or car goes into safe mode when it encounters a glitch, just functioning enough to perform the basics but shutting down all other functions to protect itself from further damage. As a psychotherapist and in my own therapy, I have encountered this “safe or survival mode” in clients and in myself. When we encounter trauma, especially in childhood, our minds and often our bodies go into “survival mode” to do just that, “survive”. The trauma we are facing is so horrific, so invasive, so overwhelming and unexpected that our minds and bodies do what they have to do in order for us to survive. Quite often we dissociate where, although we are physically present to the trauma, our senses, feelings and emotions disconnect from what is happening, in order to protect us from being overwhelmed and facing the totality of the awful rawness of the trauma.

Bessel van der Kolk notes that “Traumatised people chronically feel unsafe in their bodies: The past is alive in the form of gnawing interior discomfort. Their bodies are constantly bombarded by visceral warning signs, and in an attempt to control these processes, they often become expert at ignoring their gut feeling and in numbing awareness of what is played out inside. They learn to hide from themselves”

This “survival mode” for me as for so many people who have suffered physical, emotional or sexual abuse at an early stage of our lives is our default setting when we encounter trauma or a perceived threat as adults. And so in “survival mode” I embarked on an operation where a trachea tube was inserted through an incision in my throat, followed by seven weeks of intense radiotherapy and chemo. On one level I was aware of the immense battle that was raging in my body as noxious chemicals were pumped into me and that radiation was not only killing the cancerous cells but also healthy ones; yet on another level I was not feeling this emotionally; I had dissociated from the cancer and the treatment. I was existing and surviving but nothing more.

When we ignore our feelings and emotions they often have a habit of erupting to the surface in a confusing and frightening way. There were two experiences during my treatment where my blood pressure dropped causing me to pass out and on one occasion temporarily lose my eye sight.

A conversation with the Registrar made sense of all of this. She said that she knew I had been sexually abused as a child and that this new trauma of the diagnosis and treatment had acted as a trigger. The Registrar explained that in order to be triggered we don’t have to face the same trauma as we originally faced. It just needed to reach deep enough to make contact. This then manifested itself physically, in my case with the fainting spells and temporary loss of eyesight. In a way it was my body going into survival mode to protect me from becoming totally overwhelmed.

Mental health can be very difficult to manage when one is faced with serious physical illness, but add into that a history of poor mental health, then it can become even more complex and difficult to manage. I would love to be able to say I found some zen like experience that got me through all of this, but I can’t. Being in that space did not allow for any thoughts of taking exercise or other distractions to avoid my mood dropping. It was merely surviving each day or even each hour. I certainly was unable to see much beyond that day. In fact, there were times where I felt so ill I really didn’t think I would make it to the next day.

I am one of the lucky ones. Nine months on from getting that diagnosis I am alive; the tumour and the cancer has gone as has the trachea tube. I had great support during that time from friends who had their own experiences of cancer, from my family and also from the amazing staff at both Castlebar and Galway Hospitals. Being seriously ill can be very lonely even with that great support because at the end of the day it was me that the illness and treatment was happening to. No one could really explain beforehand how it would be. No one could take it on for me and there was no respite from it during that time. Now as I recover there is a different feeling of loneliness. The daily routine of meeting consultants, nurses, speech and language therapists, dieticians, radiotherapists…….all that has gone. And it is very quiet.

I realise that in this quietness I need to take time to recover both physically and to feel emotionally. I am looking at the positives; I am alive and in remission. I believe as a psychotherapist I will have another dimension added to what I already bring into the therapeutic relationship. I need to reconnect with the world around me and also reconnect with myself. My hope is that someone somewhere who is going through a serious illness will read this will say “Yes. Me too”, and by doing so release some of the sense of confusion around how or what they should be feeling.