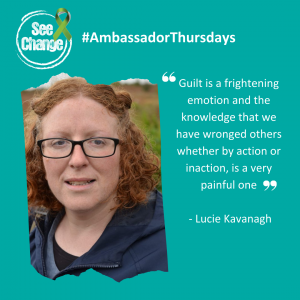 “Guilt is not a response to anger; it is a response to one’s own actions or lack of action. If it leads to change then it can be useful, since it is then no longer guilt but the beginning of knowledge. Yet all too often, guilt is just another name for impotence, for defensiveness destructive of communication; it becomes a device to protect ignorance and the continuation of things the way they are, the ultimate protection for changelessness.”

I follow a woman writer on social media who is a Traveller activist. A few nights ago she sent out a tweet to ask if people could stop using the “K” word in any context.  She outlined her reasons for this – that it brings back very painful memories of having that word used towards her as an insult.  It was a very sad and raw tweet.  I read through the responses she received and decided that they seemed to fall into 3 types of replies:

In a way I felt that that conversation highlighted the issue of guilt for us all and how we respond to it. Guilt can be unjustified, such as when we take on responsibility for things that we cannot control or things that are the responsibility of others, but sometimes it’s justified.  It’s justified when we have acted in a way that goes against our own personal values. These values can be common ones, shared by most people we know such as wanting to help others, supporting our families, being a good friend, or they can be more personal – taking a stand on an issue that’s important to us, protesting against injustice or giving voice to someone or something that needs it. When our actions don’t support our values, we experience guilt.

In the example above, the writer clearly struck a lot of nerves. Everyone who read and responded to her tweet had used the word and contributed to her painful feelings. Many had not realised; some might have had an inkling and some might have used the term as an insult. A portion of responders felt guilty because insulting or causing pain to someone goes against their values and who they perceive themselves to be. Some dealt with their guilt by a simple acknowledgement of her pain and a promise to not use the word.  But others dealt with the guilt by denial – denial that what they said had any impact, denial of how the woman felt and a refusal to accept that how she felt was real. It came down to acceptance or denial.

I think this is largely how guilt plays out in life. If we have said or done something that contributes towards stigma, exclusion or alienation, we have a choice to accept it and make amends. The amends might be to one person, if we directly know someone who has been affected by our actions, or it might be more abstract – we might need to find a way to show support or even to inform and educate ourselves on an issue in order to know that we are righting a wrong. We can of course deny it. But the thing about guilt is that it’s personal to us. Even if we deny our guilt, it’s still there because our values are still there. If we have said or done something harmful to another person, we will still know that we have, no matter how we respond to it, and guilt can be a very difficult emotion to carry, especially if we constantly fight against it and therefore, ourselves.

It’s also important to acknowledge that if we apologise to someone for something we have said or done, it is their choice whether or not to accept the apology. But if the apology is genuinely meant, we don’t have to carry extra guilt if it isn’t accepted.  By apologising we are honouring our own personal values and this allows us to move on from the situation. We might feel sadness or pain but our actions will reflect the growth and development we are experiencing. We can hold on to ourselves. Acknowledging ruptures in relationships, changes of opinion, new insights into old situations – these are all painful but huge opportunities to grow into who we want to be if we can manage not to avoid or fear them.

If let go stagnant, guilt can become destructive. We look for ways to avoid feeling it. We can shout over it. We can find very short-lived comfort in the act of blaming other people (sometimes the very ones affected by our actions) but our minds will keep telling us that it’s not about anyone else, it’s how we feel about ourselves. Guilt can drown us if we don’t find a way to craft it into the life-preserving vessel it has the capability to become.

One of the ultimate stories about guilt and redemption is, of course, “A Christmas Carol” and the way it’s crafted – the insight into Scrooge’s past to explain his present outlook on life, his journey through looking at his past and present and the world around him, having to accept that he has had a part to play in the downfall of the people he blames for their own misfortunes, and then the glimpse into what his future might look like on its present course, and finally the lovely redemptive scenes where the acts of making amends brings such joy and relief:

“He went to the church, and walked about the streets, and watched the people hurrying to and for, and patted the children on the head, and questioned beggars, and looked down into the kitchens of homes, and up to the windows, and found that everything could yield him pleasure. He had never dreamed of any walk, that anything, could give him so much happiness. (p. 119)”

You could say that the ghosts are a metaphor for the journeys we take by ourselves, through experience, therapy, learning or just life events into our own minds to discover the things that truly matter and the people that we have become. Guilt is a frightening emotion and the knowledge that we have wronged others whether by action or inaction, is a very painful one. However, taking steps – any steps – to put things right and feel better about ourselves can feel like lifting a burden. Change is a daunting prospect but without it, there is no movement and no growth and without those, there really isn’t anything at all.