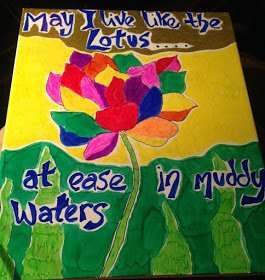 Ambassador Lucie Kavanagh took part in a series of workshops as part of our “Growing Conversations” campaign in sponsorship with Janssen and in partnership with Aware. Growing conversations was a collaborative project, presenting a show garden in Bloom focused on mental illness literacy. We are hoping when enjoying with the garden, people will get an understanding of what living with a mental illness may look like.

Involving the lived experience was an important aspect of the garden, so that it was truly reflective of that experience. Below Lucie has written a piece about her experience of the workshops.

“On the warm stone walls, climbing roses were just coming into bloom and great twisted branches of honeysuckle and clematis wrestled each other as they tumbled up and over the top of the wall. Against another wall were white apple blossoms on branches cut into sharp crucifixes and forced to lie flat against the stone. Below, the huge frilled lips of giant tulips in shades of white and cream nodded in their beds. They were almost finished now, spread open too far, splayed, exposing obscene black centers. I’ve never had my own garden but I suddenly recognized something in the tangle of this one that wasn’t beauty. Passion, maybe. And something else. Rage. ”


“I’ve attended two workshops in the last fortnight around creating a garden for the Bloom festival in June.  The theme of the garden is mental health and wellbeing and I was lucky enough, along with some others from See Change and Aware, to be invited to use our experiences of mental health difficulties to give some input into the structure and content of the garden and decide how shapes, words and symbols could be used alongside the material, to promote and compliment the overall theme.

During the second workshop there was discussion around the wording that would be used in and on different structures the garden.  Would we have quotes?  Lines of poetry?  Or just words?  A list was drawn up of emotions and feelings; strong, determined, happy, broken, anxious, joyful, flawed, guilty, angry, peaceful. The list kept being added to and the words were jumbled up together in a cloud shape when we saw them on the screen. Some were bigger than others.  There was no pattern, just this jumble of feelings.

Part of our role was to advise on how to reflect lived experience of mental health issues and at one point there was a question raised about the words.  Should the more “negative” sounding words and phrases be taken out to just leave the positive?  Wouldn’t this be more in keeping with the overall beauty and peace of the garden?  Would the darker words seem of place in such picturesque surroundings?

As the point was debated I found myself transported to different periods in my life where I have been in beautiful and happy places, feeling anything but.  I’m sure so many can understand this.  When your mood is low, it can be excruciating to be in environments where there’s an expectation of happiness or excitement.  The effort you have to make to “match” takes every ounce of energy.  Worse than that is the guilt.  What’s wrong with me?  Why can’t I enjoy this?  I should be grateful/happy/relaxed.  Is it always going to be like this?

You take yourself away and isolate because it’s easier.  Easier for you and, you tell yourself, easier for others.

Thinking of that gave me the courage to chime into the discussion.  People were already not keen on the idea of only focusing on the positive. I said that if I was in that lovely garden, looking at all these positive and happy words and having a bad day, the garden would become yet another thing that I can’t be part of and yet another proof that the inside and outsides of me can never match.  We all looked again at the cloud of jumbled up emotions and feelings and decided that we liked it because it’s all of us.  Everyday we can be any combination of these things, regardless of diagnosis, gender, history, age or circumstance.  Emotions just are.  If we are struggling, they might be over or underwhelming us but they are always there, telling us what we need to know.

It’s taken practice to see emotions as necessary and more importantly, not as the enemy.  When it’s hard to regulate them, it can feel like your mind is constantly at war with them, forever trying to calm them or feel them or understand them.  Sometimes it is tempting to stay in the “frozen” place where everything is thought and nothing is really felt.

But then beautiful gardens would never mean anything at all.”

Mental Health is not to Blame by Lucie Kavanagh