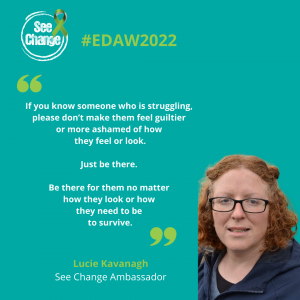 “Listen to the people who love you. Believe that they are worth living for even when you don’t believe it. Seek out the memories depression takes away and project them into the future. Be brave; be strong; take your pills. Exercise because it’s good for you even if every step weighs a thousand pounds. Eat when food itself disgusts you. Reason with yourself when you have lost your reason.”

― Andrew Solomon, The Noonday Demon: An Atlas of Depression

Out of nowhere this morning, the mention of Eating Disorders Week at the beginning of March gave me an intense desire to share something that I never thought I would want to share openly. My own very long and frustrating battle with food.

I believe that eating disorders are unfortunately judged largely on what can be seen – weight loss, weight gain, physical health, physical appearance. I also believe that this means that a large proportion go unseen and untreated for that reason, they are mainly about the unseen and there is such intense shame around talking about them.

If I look back on childhood photos, I was never particularly overweight as a child, but I also wasn’t as thin as many of my peers. I remember a friend’s mother laughing to another parent about how her child needed to gain weight and “Lucie needs to lose some”. I was about 10 and this was one of my first memories of becoming aware of my weight. I was a child who didn’t fit in well at school and I was an easy target for bullies because I didn’t know how to relate to my peer group. “Fat” was an insult easily thrown around and I took it for granted that that’s what I was. It didn’t always particularly bother me; it was just a fact inside my mind. I got used to hearing it.

But later on, in teenage years it was far more of an issue. I was an overweight teen and very used to hearing my weight being discussed in my hearing, as an insult, as a fact, as a problem. I had no natural sense of what to wear to fit in even though I dearly wanted to. I was at war with myself for a number of reasons and life felt confusing and at times, very out of control. Very swiftly and suddenly, a desire to lose weight led to a complete switch from comfort eating to eating as little as possible, to savouring every inch of control my newly shrinking body was giving me. There was a sense of triumph in the praise about my weight loss which soon turned into “you wouldn’t want to lose much more”. There was pleasure in the sense of achievement it brought me. The control. There is nothing quite like that sense of control at being able to do something that feels quite unique and thriving from the energy and excitement it brings.

All of this is, of course, a mirage. There is no control. What you quickly learn is that the voice in your brain that counts numbers constantly is in charge. You learn that your body isn’t invincible, but that you have denied yourself the pleasure of casual eating, of enjoying food, of socialising, of thinking of other things, anything, other than the voice inside that talks at you night and day.

Over time that extreme dieting turned into an up and down cycle of extremes – one to the other, strict ritual and routines. For most of my adult life my weight has changed constantly but there is usually nothing to show outwardly the exhaustion of the fight. It became routine. I followed its whims and at times of extreme stress, it turned all consuming, often a comforting distraction from other things.

In my 30s once again I started to restrict myself for long periods of time. This time, there was no triumph or sense of control. I felt the shame of it, that this situation had controlled me for so long and that there seemed to be no way out of it. No one would ever take it seriously. This time depression treatment and counselling helped me to break some of the cycles.  Things normalised back to the rituals and yo-yoing cycle. Then there came medication with the terrifying prospect of weight gain as a side effect. Since then, there’s a constant shame of that against the fact that it is helping, that learning to accept and stop fighting with my body will be an important step towards my mind being at peace with itself.

If you look at me now, I think you see the weight because it’s what I see. It’s hard to think of the times I thrived on comments such as “you’re really keeping the weight down” and can still remember the pleasure of feeling worthwhile because that’s what was expected of me. I was once praised me for starving and depriving myself but there will never be praise for what is infinitely harder – living in this body without fighting to change it. I have been at war with it for most of my life.

Eating disorders are not a choice. They are not about media or magazines or wanting to look like supermodels. They are a long, vicious struggles that no one would ever willingly put themselves through. If you know someone who is struggling, please don’t make them feel guiltier or more ashamed of how they feel or look. Just be there. Be there for them no matter how they look or how they need to be to survive. Remind them that there is a still a place in the world for them and that the voice in their head is not indicative of how they are seen or perceived by those around them. Remember that it’s the hardest thing to talk about and shame is a powerful silencer. Just be there.

When I was in college, a lifetime ago and just after a long period of depriving myself, there was one cold winter day that a lecture was cancelled. I went with some friends to the canteen and stood in line with them as they ordered hot chocolates and cakes. I remember a moment, just a brief moment, of thinking-there’s nothing to stop me having what I want. It was the simplest and yet strangely profound thought and I remember not being sure whether to laugh or cry at the knowledge.  That moment carried me though many times.

No matter how long it takes, recovery is always worth it.

“You are not a mistake. You are not a problem to be solved. But you won’t discover this until you are willing to stop banging your head against the wall of shaming and caging and fearing yourself. (p. 84)”

― Geneen Roth, Women, Food and God: An Unexpected Path to Almost Everything

The Hardest Conversation by Daniela Ferro 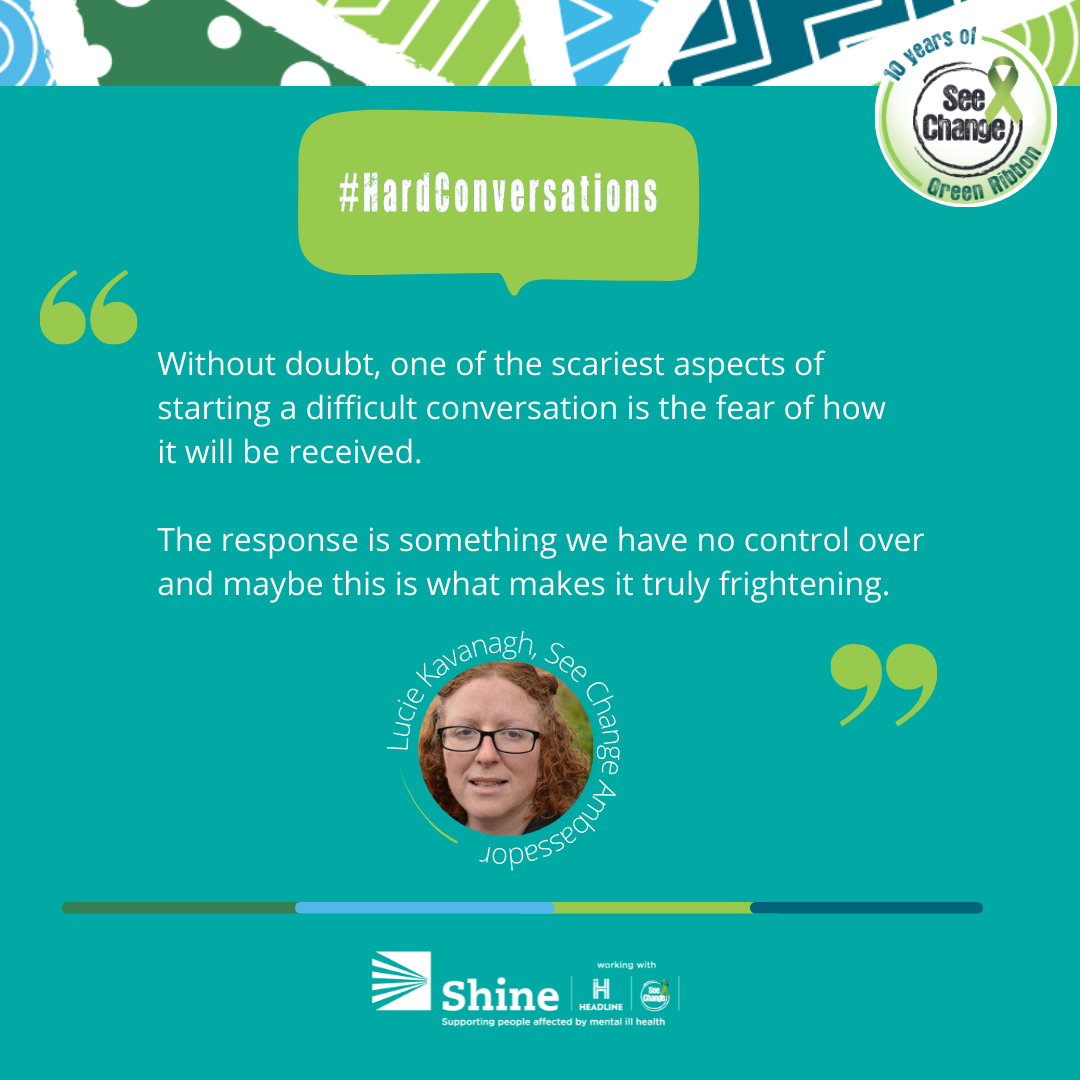 Having the Hard Conversations by Lucie Kavanagh 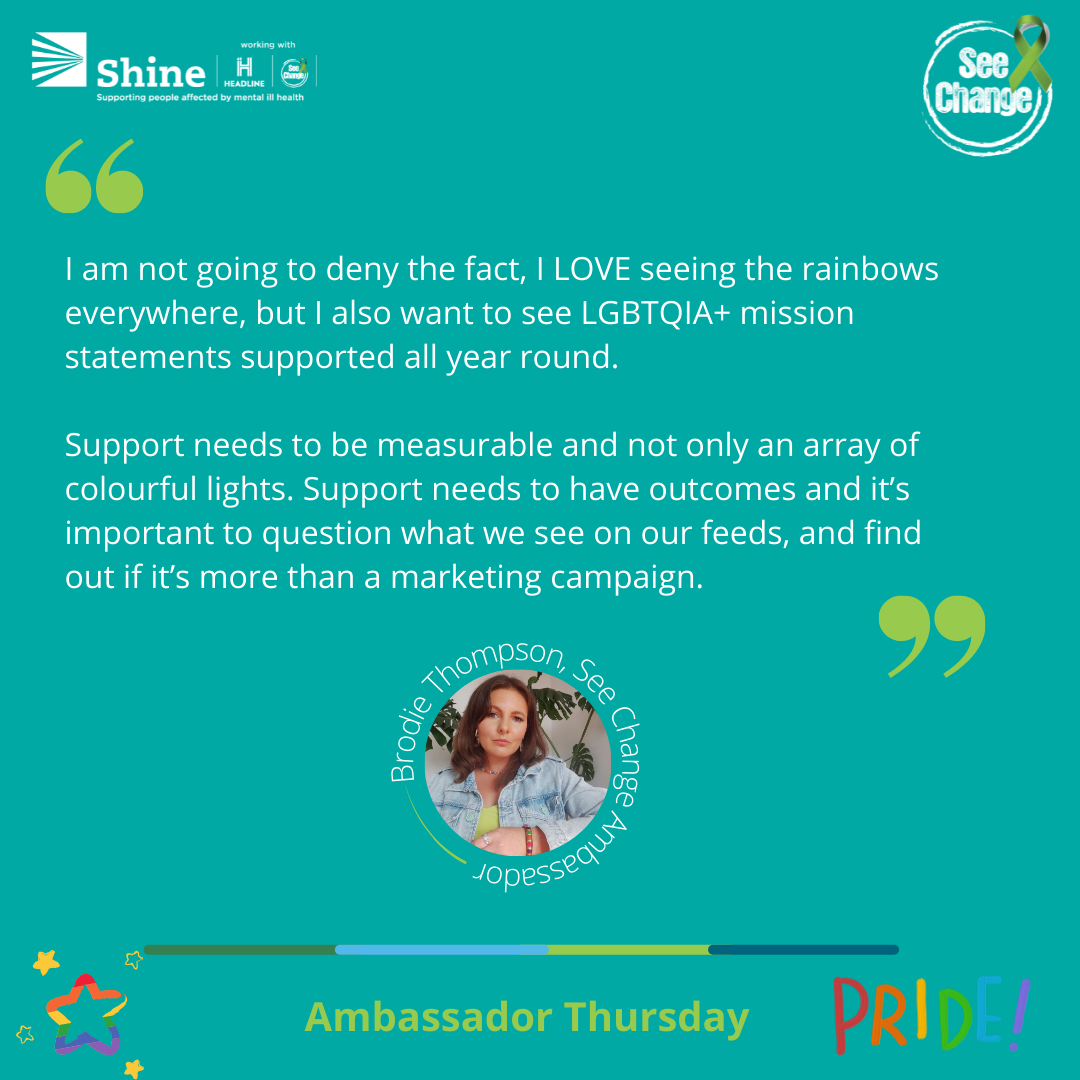 B is for Brodie and Bisexual by Brodie Thompson