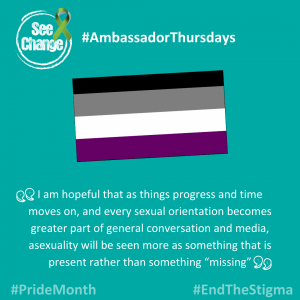 “…I’d made myself believe that I was fine and happy and fulfilled on my own without the love of anyone else. Being in love was like China: you knew it was there, and no doubt it was very interesting, and some people went there, but I never would. I’d spend all my life without ever going to China, but it wouldn’t matter, because there was all the rest of the world to visit…”

Navigating the area of sexuality as a teenager with a trauma history is intensely difficult. It tends to leave you in a strange phase of feeling both younger and older than your peers (sometimes in the same moment). Perhaps that’s why asexuality was a concept that took me so long to find and own. It was a relief to find it: an orientation that finally described me. Lots of variables. That was ok. I had time to figure it out.

Is it actually possible to reach ones’ middle adulthood without any idea of what sexual orientation you are or what you actually want out of life, relationships wise?  For me, it is.

I never dwelled on the issue but it was always there. I knew something was different about me. I tried out orientations like new outfits. All were interesting but nothing really fitted. Something was missing and it was so obvious that I couldn’t name it or ask other people about it. I felt that I was supposed to feel and be a certain way but couldn’t define it. How could I then explain its absence?

Is it appropriate to talk about sexual orientation as a mental health issue?  No.  Of course not.  But for me when I was younger this issue fell into both camps: was asexuality something I was born with or a reaction to trauma in childhood? It was very difficult to figure out. When I eventually discussed the subject with a therapist she asked me if I felt I was missing out on something.  Did I see it as a problem? My honest answer was and is “no”. I don’t see it as a deficit. This, my therapist helped me to see, was what was important.  If it wasn’t an issue for me, then it wasn’t an issue.

For me, sexual attraction is a colour I have never seen.  No one can truly describe it to me.  They can tell me what it’s like for them, how they see it, what shades of it appeals to them.  The reality of the colour is all around me and the fact that people see and enjoy it.  But I never have and never will be able to see it. Added to this is a tentative diagnosis of autism and suddenly I can understand why it has always been a struggle to comprehend aspects of the world around me.

It’s not easy. Try telling people in your teens or 20s that you have no interest in relationships.  I’ve heard every reaction from disbelief, amusement to irritation (when I refused to allow a friend to set up a date with someone she felt was perfect for me). Getting to the age where people stop asking out of awkwardness is a relief.

Different articles and opinions I have read suggest that some people see asexuality as something that’s missing…something that isn’t there that “should” be there…but for me it’s a tangible part of me.  It’s so intrinsically who I am that I would never even question that aspect of myself.  It would be like arguing with something as defined as eye colour.

I think because I have also struggled throughout my life with mental health issues, it can be more difficult at times to separate out what is me and what is part of my difficulties and how does one affect the other? There are so many things about me that are “different” that perhaps this is yet another. As I have grown older, differences become easier than they did as a teenager or young adult, indeed I think the older we get, the more we embrace them.

I am hopeful that as things progress and time moves on, and every sexual orientation becomes greater part of general conversation and media, asexuality will be seen more as something that is present rather than something “missing”. I truly hope that that process has already started.